Why does wi-fi signal strength fluctuate wildly in a mesh network?

Hi. I am an old (retired) IT guy but not really too savvy on network tech. I now live in an apartment bldg for seniors that has wi-fi provided as part of the amenities. My best guess -- using a software wi-fi scanner -- is that they have set up a mesh network with 10 APs for 25 apartments in a 2 story bldg.  About half of these have almost no detectable signal from my desktop so I am guessing these are the ones farthest from my unit (I live near the end of the bldg) and the other half seem to have gradually increasing signal strength which also makes sense. The channels on these AP's (that I can see) are 6, 11, 38, 151, and 159 so I know they are using both 2.4GHz and 5GHz freqs and I see they are using 3x3 MIMO. Other than that there is not a lot I can tell as the boxes are hidden in the walls somewhere.

Below is a snapshot of the signal strength I am seeing on the network right now, which is close to useless. I am using my phone's hotspot to post this. 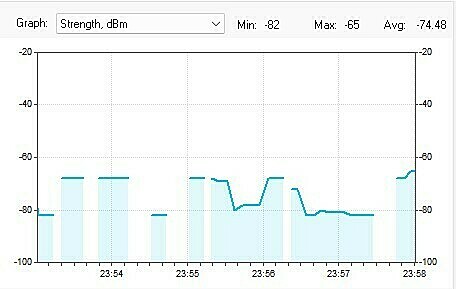 EDIT: Some additional information ...
It was suggested that the variance is actually seeing different AP signals due to switching. I know about switching in a mesh but that is not the issue here. Each of the AP have a different MAC so I am able to see when a switch occurs, and switching is not occurring very often. Below are 2 graphs (signal strength and quality) showing ALL the AP's together and you can see that each of them is wobbling all over the map.
SIGNAL STRENGTH of all AP

SIGNAL QUALITY of all AP

I do know about how same-channel interference works, and how microwave ovens and bluetooth sweeping can each affect wi-fi ... some of which I suspect are likely the cause of the signal voids in the connection graphs. But none of those explain the variance of signal strength.

New Advances in IT Security Assurance and Compliance