I have a PC connected via Ethernet that periodically drops the network connection. I've cut off the cable ends and redid them to be sure that wasn't the issue. This PC is in an enclosure and the Ethernet cable can't be bumped, pulled, or moved.

The problem reappears periodically but I might have found the culprit: 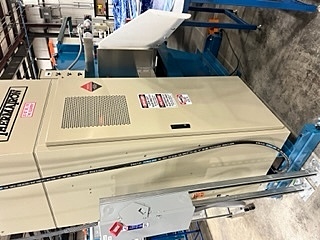 Not sure why it is uploading sideways...

It's a Thermatron machine that apparently uses RF to melt/seal vinyl. It sits about 10 feet away from the PC in question.

I've set up a continuous ping to the machine to see if operation of the Thermatron correlates to the signal loss.

I'm really just wondering if this is a possible explanation for my troubles. Anyone encountered this?

Unmanaged switch on Managed Network - reasons not to? Pritunl behind router - domain users cannot change pw on VPN Poor, wrong question about which OSI Model layer decides physical path Smart bulbs on different vlan network? How do I find the IP address of a switch by its mac address? View all topics
check Best Answer
View Best Answer in replies below