Pain in the VLAN

Hi all.I have been working on setting up a network to suit my family, iOT and work needs.With the replacement of some hardware and the purchase of a new VPN router I've come a long way.However, I seem to be able to configure port based VLAN for segmentation, but beyond that I struggle.I hope there is someone that can give me some insight in the deeper configuration layers.I have attached a picture of my current network and highlighted the problems.Any comment is welcome and I am happy to elaborate on how I have set it up in case someone is trying to do the same.Thanks a plenty! Vince

* VPN router after modem to split all switches
* WiFi router to manage most devices
- personal devices on Main WiFi
- all iOT devices on Guest WiFi
-all in the same IP range, router is DHCP server
* reserved address for devices with web GUI
* Google devices on Main WiFi for casting purpose
* TVs and streaming hardwired
(PENDING: ATV - cable to be put in)
* Devices hardwired routed to WiFi router (port VLAN)
* Main Workstation to manage all network devices
(PENDING: cannot access Switch US)
* Internet only devices to be isolated
(PENDING: not been able to set this up)
* Printer to be used by all devices
(PENDING: currently no access other than via WiFI)
* Work Network to have only main devices on that LAN
This network also manages network devices
(PENDING: not been able to set this up) 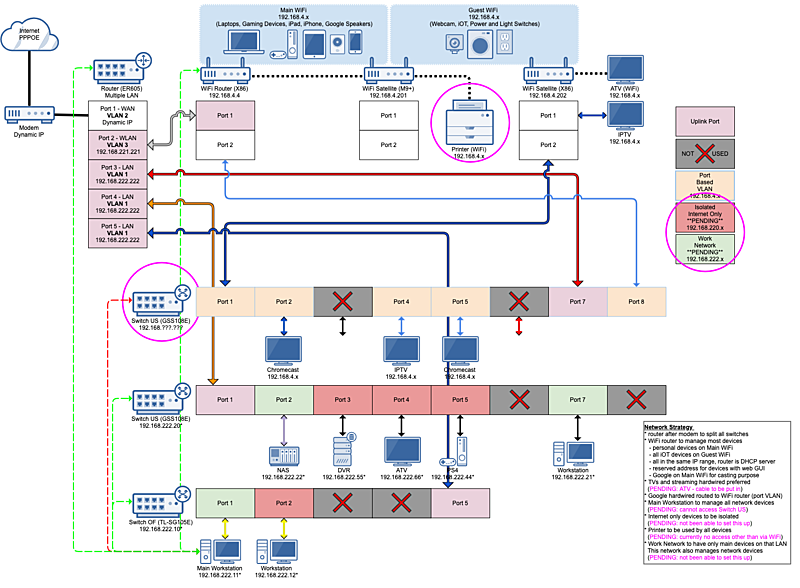 Duplicate MAC Addresses on a batch of Dell OptixPlex 390? Accessing Esxi remotely? Working method to EnableLinkedConnections for Win 11 user/admin lev... How do I connect remotley to a network? Ubiquiti EdgeRouter X View all topics
check Best Answer
View Best Answer in replies below