Staying on top of IT is hard. Here's a roundup of this week's new IT product launches to make it a little easier. If you think we're missing something, tell us in the comments below and we'll add it to the list. 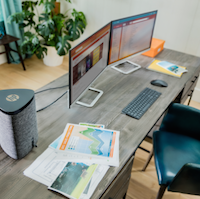 According to the Windows Blog, the Pavilion Wave features dual microphones for voice recognition and Cortana and supports up to two 4K displays out of the box. It also comes with "three USB 3.0 ports, one USB 3.1 Type-C port for data transfer, one HDMI port, one DisplayPort, Gigabit Ethernet and a microphone/headphone jack." On top of that, it features Intel Core i7 quad-core processors, a choice of a 2TB HDD with an optional 128GB SSD, up to 16GB of DDR4 system memory, and optional AMD Radeon R9 M470 discrete graphics. It starts at $549.99 and will begin shipping on September 23, 2016.

According to MicrosoftOpens a new window, "The HP Elite Slice is the first modular commercial desktop with cable-less connectivity and enables customers to build the desktop of their choice." That sales pitch doesn't detract from the novelty of the Elite Slice, a modular desktop that gives users the ability to add functionalities such as a wireless charging cover or an audio module from Bang & Olufsen. By itself, the Elite Slice is a small computer that weighs 2.31 pounds and measures 6.5” x 1.38” x 6.5”. Despite this, it packs some power with the same specs as the Pavilion Wave. It starts at $699. 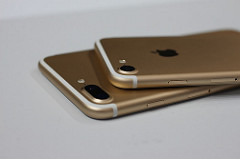 According to AppleOpens a new window, "The new iPhone features new advanced camera systems [...], more power and performance with the best battery life ever in an iPhone, immersive stereo speakers, wide color system from camera to display, two new beautiful finishes, and is the first water and dust resistant iPhone." One thing though: The iPhone 7 lacks a headphone jack (though at this point, that should be news to no one). Apple says that by taking out the "antiquated single-use audio standard" it was able to make room for its new A10 Fusion chip that features two high-power processors and two low-power processors, a bigger battery, and a camera processor that runs 100 billion operations in 25 milliseconds.

The new Apple Watch Series 2 features iterative advances on the original Apple Watch with a new and faster dual-core processor, a stronger GPU, built-in GPS, and water resistance up to 50 meters. Unlike last year's positioning of the Apple Watch as a must-have device for cyberflanêurs, Apple now calls the Apple Watch a must-have fitness tracker. This is not uncommon for Apple to do: In finding a simple and tangible use case for its still-new technology, it is making the device accessible to consumers who will likely find other uses for the wearable.

Last but not least: iOS 10. First previewed in June, the new mobile operating system brings Siri to the forefront with third-party access and offers significant improvements to Maps, Phone, and iMessages. iOS 10 also features a UI redesign that does away with several long-standing features (swipe to unlock, for instance) and modernizes the phone software to reflect new technologies.

Spiceworks has launched its new tool Website Down Checker, which "tests a domain name or IP address that you specify by sending an HTTP GET request to the site you're testing." According to Spiceworks, "The request is sent from a Spiceworks server based in the US." A simple and intuitive tool, Website Down Checker is a web-based tool that is free to use.

The mobile workforce scheduling and management company SkeduloOpens a new window has released its newly designed app Skedulo X, which "allows workers to interact with dispatched job and appointment information regardless of whether they have an active cell phone connection."

Skedulo X features integration with enterprise platforms such as Salesforce, which allows mobile workers to perform tasks quickly and directly from their mobile devices. It also features a scheduling and time management system that integrates with Waze, Google Maps, and Apple Maps, making it easy to direct traveling workers to their destinations. Skedulo is currently offering free demos of Skedulo XOpens a new window to interested parties. It works with Android and iOS and costs $35 per month per worker.

SOLiD has launched ALLIANCE eBIU, which is "an enhanced version of its industry-leading multi-carrier DAS head-end equipment." According to SOLiDOpens a new window, "The ALLIANCE eBIU has been redesigned in a more compact form factor that takes up less space in the head-end. An integrated POI (point of interface) eliminates the need for separate hardware for power attenuation or conditioning. Together, these design changes reduce required rack space by 60% and de-clutter cabling." It supports seven frequency bands — the 2300 MHz (WCS) and 2.5 GHz bands, as well as the 700, 800, 850, 1900 and 2100 frequencies — and features alarms for monitoring activity. SOLiD is currently offering quotesOpens a new window for its new DAS solution.

As an LTS release, Linux Mint 18 KDE will be supported with security patches and general updates until 2021, making it an attractive option for business and home users looking for a stable and secure operating system. It requires 2GB of RAM, 10GB of disk space, and 1024x768 resolution to run and can be downloaded for freeOpens a new window via Linux Mint's website.

Nimble Storage has launched SiteAnalyzer, a free cloud-based tool that give "reseller partners [the ability] to examine end user storage environments and propose specific storage solutions." Useful for MSPs, SiteAnalyzer does away with the need for manual work to determine an organization's current storage setup while producing in-depth and detailed information about the the current environment. According to Nimble StorageOpens a new window, SiteAnalyzer lets reseller partners "provide prospects with a free analysis of their storage environment, making it easier to jump-start the sales process and identify the prospect’s unique application and underlying infrastructure environment."

SmartBear has unveiled a new version of LoadComplete 4, a desktop tool for "load, stress, [and] scalability testing of websites and web applications." According to SmartBear, the tool works "with both traditional HTML web sites and with Rich Internet Applications using modern web technologies like AJAX, ASP.NET, Java, Flash, Flex and Silverlight." Key features include a simple tool to create different load tests, a visual programming interface, and a on-demand load generation from the cloud. With a free version that works with up to 25 VUs, LoadComplete is a neat way to test website strength. For more VUs, interested parties must pay a monthly subscription. Prices can be foundOpens a new window on SmartBear's website.

Are we missing something? Let us know below and we'll add it to the list! And if you have a product launch planned, let us know and we'll include it in a future roundup. Please email all submissions to editorial@spiceworks.com.